Yesterday, Rep. Chris Gibson (R-NY) took the climate debate in this country a big step forward when he and 10 Republican colleagues introduced a resolution in the House that acknowledges the problem of climate change and commits to working on solutions. 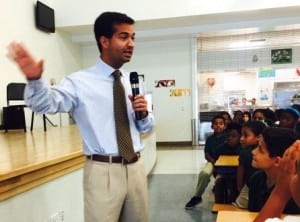 Rep. Carlos Curbelo, one of the resolution co-sponsors, speaks to fifth graders in Homestead, Fla., where he received thank-you letters from 200 students last May for being a climate leader.

Amid the acrimonious and contrarian muck of partisan politics, their actions were extraordinary. Some will cry too little, too late. Others will say that the issue of climate change is still up for debate. But no matter the dissension, we are now talking. And the reason we are talking is because of the hard work of CCL and others in building coalitions to let members of Congress know that when they defend our climate, they have our support.

Jose´ Aguto was hired by the Friends Committee on National Legislation (FCNL) in 2012 to assess where the organization could have the most impact on the issue of climate change. He saw that there was room for the faith community to bear the moral standard to potential allies in Congress.

“The partisan divide that happened was a fiction we had to debunk at a fundamental level,” Aguto said. “Return to bipartisan recognition on this issue is crucial to moving forward.”

So when Columbia County, New York, CCL Chapter member Karen Frishkoff met with different people of faith at the CCL 2014 conference, including FCNL, a powerful relationship was formed. Another CCL member from the Columbia County chapter, Iona Lutey, had been developing a relationship with Rep. Gibson for a year prior.

“We really did follow the CCL approach: I would seek him out and was really friendly, and I really genuinely liked him!” Lutey said. “We treated him with respect and gave him good information.”

FCNL’s Aguto organized the Call to Conscience, a coalition of mostly faith-based groups that also includes CCL, and it brought forward a moral call to action to close the partisan divide. Lutey and Frishkoff became the ambassadors of this coalition to discuss climate change with Rep. Gibson. The two met with Gibson and surprised him by insisting they didn’t want to talk about Carbon Fee and Dividend or any other legislative proscription. They just wanted to talk about their shared concern for the planet as people of faith.

While Lutey and Frishkoff were reaping the benefits of a respectful working relationship in New York, CCL volunteer Jay Butera was doing the same in Florida. As Senior Congressional Liaison for CCL, Butera specializes in working with members of Congress from Florida. The Philadelphia resident said he tries to be present in the capital as much as he can, when others cannot, especially in between caucuses. He worked closely with members of Miami’s CCL Chapter to gain Ileana Ros-Lehtinen and Carlos Curbelo as co-sponsors on Gibson’s resolution.

“The process we used in Florida is fairly unique. We formed a coalition with community leaders, chambers of commerce, business owners, mayors, and academics to bring those leaders in the community to meetings with members of Congress,” Butera said.

This strategy was so effective in Miami that it gave rise to the CCL Endorsers Project, which has spread throughout the organization. Butera found that representatives were impressed that business leaders and others were willing to spend their own money to meet with them at CCL’s 2015 conference. When paired with hundreds of letters from constituents and consistent, friendly meetings, Butera helped to orchestrate a ladder of influence that demonstrated support for climate action is ubiquitous and important to constituents.

Dr. Danny Richter, Legislative and Science Director for CCL, who worked alongside Aguto in coordinating and coaching local CCL chapters to meet with representatives, stresses that the actions of Chris Gibson and the ten Republican co-sponsors of the resolution show true concern despite what opponents may say. With the Koch Brothers spending nearly $1 billion in the run-up to 2016 elections, the consequences for these dissenting voices are real. Despite the obstacles ahead, CCL remains confident in its process and persistence in the face of opposition.

“We anticipate attacks from the right and from the left claiming greenwashing, and from interests who haven’t embraced climate legislation as a necessity,” said Richter. “But this is a sincere, reasonable attempt to get an honest meaningful conversation that will result in action.”

Stone Irvin is an intern working with the communications team at Citizens’ Climate Lobby.