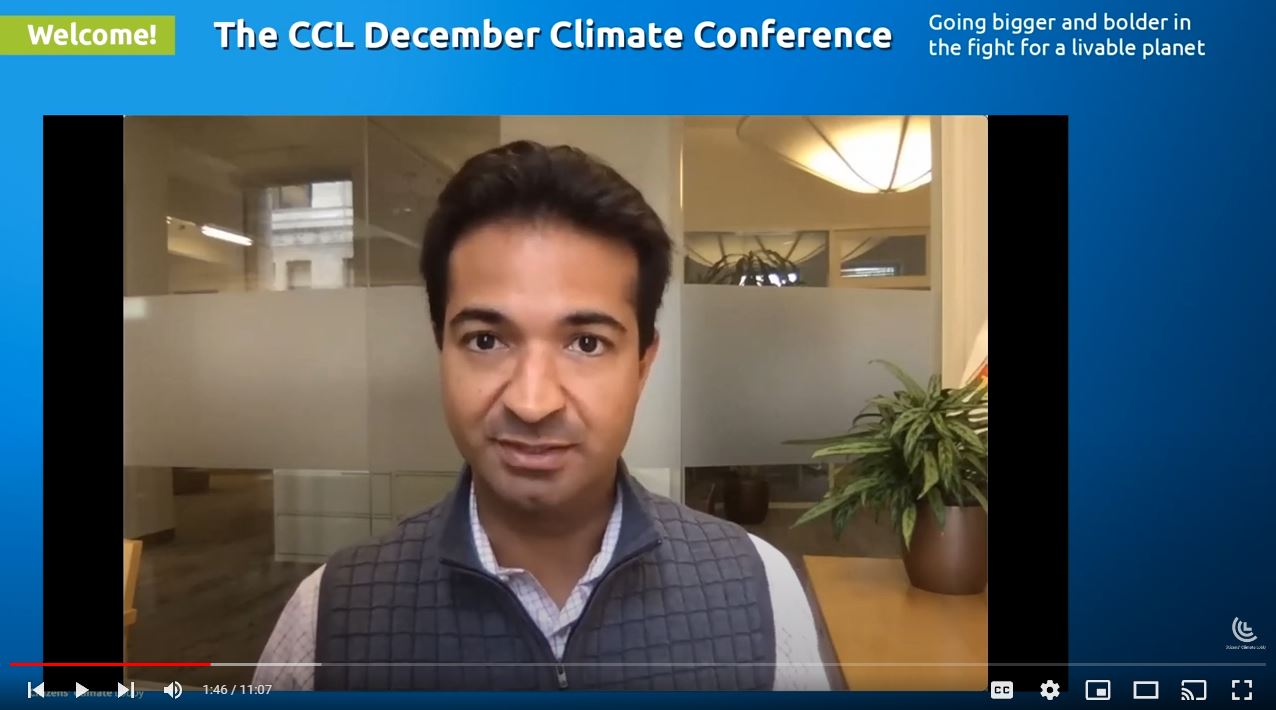 In this opening keynote address from former U.S. Rep. Carlos Curbelo, Mr. Curbelo discusses the impact that CCL had on his work as a conservative and bipartisanship as part of creating a lasting change. Read and watch below as Mr. Curbelo shares his appreciation for CCL’s work.

Saludos, my name is Karina Ramirez, and I serve as CCL’s Inclusion and Diversity Director. I’m connecting from West Palm Beach, Florida in the traditional land of Seminole, Taíno, and Tequesta people. My pronouns are she/her/ella, and I am pleased to introduce our conference keynote speaker. Carlos Curbelo is a former member of the U.S. House of Representatives. First elected in 2014, Mr. Curbelo served on the House Transportation and Infrastructure Committee, the Education and Workforce Committee, the Small Business Committee, as well as the Committee on Ways and Needs.

While in Congress, Mr. Curbelo was also a leader in climate policy, immigration reform, and gun safety. He co-founded and co-shared the bipartisan Climate Solution Caucus during the 114th Congress and served in a leadership role in the Problem Solvers Caucus. He returned to the private sector in 2019 when he co-founded Vocero, a communications and strategic consulting firm. Mr. Curbelo was born in Miami and is the son of Cuban exiles. He was educated in a public school system and received his bachelor’s and master’s of business administration at the University of Miami. He is married and has two children. As a fellow Floridian, I applaud Mr. Curbelo’s dedication in advocacy for civility in politics, and for looking out for communities most impacted by climate change.

Es un placer recibir Mr. Curbelo, it is a pleasure to welcome Mr. Curbelo to our conference.

Karina, muchas gracias por esa amable introducción, thank you for that kind introduction and thank you to everyone at Citizens’ Climate Lobby for this opportunity to be with you, to spend a little time together. I certainly hope that in the near future, we can gather in person.

I never forget from my time in Congress, those visits from members of the Citizens’ Climate Lobby in our offices, walking the halls of Congress, how meaningful that was. And that also leads me to thank you again, because during my time in Congress, which is when we kind of started building bipartisan dialogue for the first time ever in the U.S. House of Representatives on the issue of climate change and the environment and reducing emissions, it was Citizens’ Climate Lobby that really energized me and my colleagues, the members of my staff — and that motivated us to work harder, to reach out across the aisle trying to build the bipartisan consensus that is so necessary if we’re going to have meaningful, durable climate policies that can secure a healthy and prosperous planet for us, and of course for future generations. So I’m eternally grateful to Citizens’ Climate Lobby.

I assure you that the work you do makes a difference. I saw it make a difference when I was in Congress. The reason that we started the bipartisan House Climate Solutions Caucus together with Citizens’ Climate Lobby is because there was no dialogue. There was no communication across the aisle on this important issue. There was a lot of bickering, there were a lot of empty attacks going back and forth, and we decided that we needed to create the first organization inside the Congress dedicated to having this conversation, to establishing the relationships and building the trust that is necessary to produce good policy. A lot of people criticize the idea of pursuing bipartisanship, and to some degree, I understand — bipartisanship is not an end, but bipartisanship is a means to achieving good durable policy.

Of course, we know Congress can use reconciliation to pass bills with only the support of one party, but we also know that over time, those types of policies tend to have less staying power. They tend to be less durable than policies that are passed with bipartisan support. And I also remind people that interestingly, and a lot of people don’t realize this — before the IRA, which obviously represents a major investment and a major step forward when it comes to emissions reductions to reducing pollution in the United States — but before the IRA, all of the significant wins in Congress having to do with climate and the environment were bipartisan wins.

Members of Congress worked together recently to pass the Kigali Amendment to the Montreal Protocol, which has to do with the phasing down of hydrofluorocarbons, of course those are greenhouse gases that are far more potent than carbon dioxide. The parties work together to do that. That policy is safe forever, and that’s something we have to celebrate. The bipartisan infrastructure bill, which included significant climate provisions, major investments in the transition to clean energy, that was done with bipartisan support. Murkowski-Manchin, back at the end of 2020, another bill that was the product of many different senators working across the aisle and received support in the house as well. And that was actually signed into law by former President Trump. So, bipartisanship in and of itself is not worth pursuing, but when you think about what it can yield in terms of security, longevity, durability for important policies, then it becomes clear that it is absolutely worth pursuing. And something that I really, really appreciate about Citizens’ Climate Lobby is that the organization has always been fully committed to engaging Congress, Republicans, Democrats, and trying to foster those conversations.

So what I want to do today is thank you, but also encourage you continue your efforts, to double down on your strategy. The growth that I have seen in terms of bipartisan cooperation in Congress since we started working together some seven years ago has been remarkable. Again, I remind people that there was no conversation, there was no dialogue, when we started working together. Today, members of Congress are collaborating across the aisle to pass policies that are going to make this a cleaner, healthier planet for future generations, [policies] that are going to ensure that our kids and our grandkids and that generations after them will have at least the same opportunities and hopefully better opportunities to enjoy this wonderful gift from God: planet Earth.

And also to grow economically, to prosper, to start careers in fields that we can’t even imagine today — the new jobs that the transition to clean energy is going to continue introducing into our economy. And again, that’s something that Citizens’ Climate Lobby appreciates as well. We can have a thriving economy. We can embrace capitalism and environmentalism at the same time. And those are the types of messages that we need to spread in our society and specifically in our political system. For too long, some have presented false choices. Some have suggested to us that this is all a zero-sum game — that we either care about jobs and the economy or we care about reducing pollution. It doesn’t have to be that way. As my good friend Mayor Suarez of the City of Miami, a Republican who leads on climate, says, the environment is the economy. And that’s something that Citizens’ Climate Lobby understands and puts into practice every day in the way they engage members of Congress and leaders at every level of government.

So, I don’t want to go on for too long here because I know you have a lot of other speakers and a lot of business to conduct in this virtual conference, but I want to thank you again and I want to encourage you to keep doing this very important work. Our political system, our planet, our politics — they need the members of the Citizens’ Climate Lobby to be active, to be participating, to show up at town hall meetings, to meet with representatives in their offices, in person, if possible. It is time to start doing that again. And there’s no substitute for in person interaction and communication.

So count on me always to be on your side, to work with you, to support your efforts, because while I was in Congress, you made a big difference. You made my job easier. You made it possible for me, together with Ted Deutch, my colleague, while I was in Congress, from the West Palm Beach area to establish the first ever organization inside the Congress dedicated to bipartisan dialogue, to reduce emissions, to reduce pollution, and to help deliver that clean, safe, healthy, prosperous planet for us, for our kids, for our grandkids. So Citizens’ Climate Lobby: thank you. Thanks for including me in your family. Always count on me, and have a wonderful conference.