If there was one thing to be said about the 5th Citizens Climate Lobby International Conference, it became apparent that CCL is now operating on a whole new level. Final numbers are not yet in, but once again we nearly doubled in size, with around 600 volunteers attending this year’s conference. They visited about 500 congressional offices throughout the week, with 400 of those meetings happening the first day of lobbying. 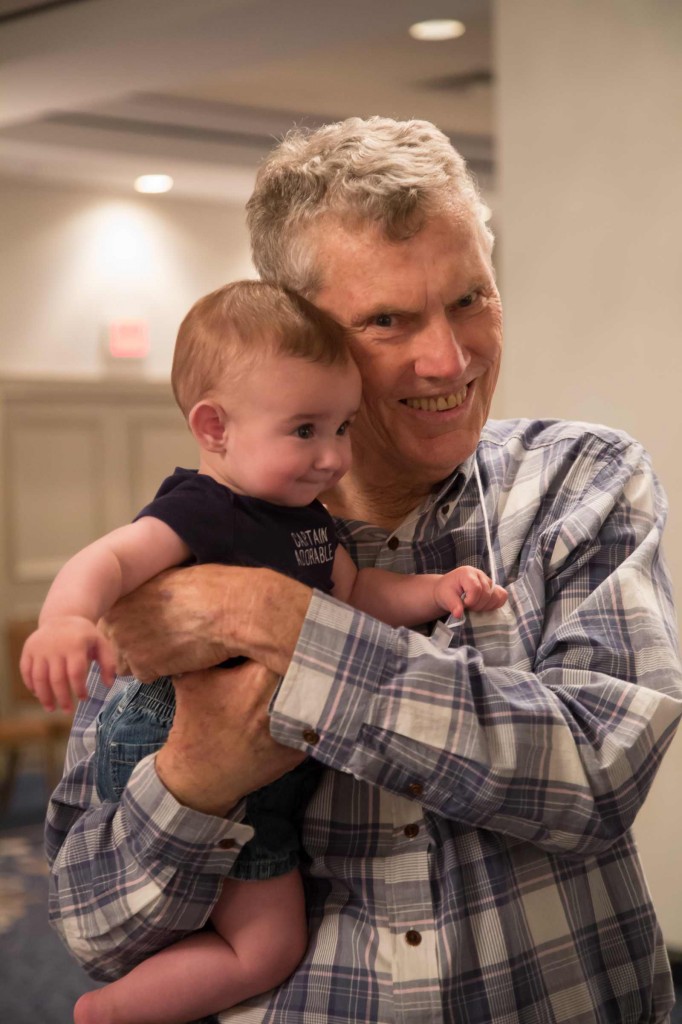 Of all the wonderful photos taken at the conference, perhaps the one that best captures the spirit and purpose of the conference is of CCL Founder and President Marshall Saunders with 7-month-old Lincoln Reynolds. He’s the son of Brian and Kelly Reynolds from the Lincroft, NJ, chapter.

“I didn’t come to Washington for my son.  I didn’t come for my wife or my friends or for anyone specifically,” said Brian.  “I came because global warming is a problem that will change the American way of life and I don’t have the right to both acknowledge that and ignore it.  I came to Washington because voting and rallies aren’t enough.  If you really understand this threat then you have a moral obligation to participate in that last, most important, bit of citizenship.  This much and no less is required from those of us who care enough to want our way of life to continue.”

For some young adults, though, the future appears so bleak they make a conscious decision not to bring children into the world. That’s the case with the daughter and son of CCL’s 61-year-old Washington intern (a story in itself) Elizabeth Wallace. But on the first day of lobbying, Elizabeth sent them this hopeful text:

“This week I am lobbying on the hill for a proposal to put an escalating fee on extraction of fossil fuels which is then returned in dividend checks to the American public equally. It will add to job creation as well as decrease co2 to 50% of 1990 levels by 2035.  If it works, perhaps we have something to look forward to.”

Tears came to her eyes when her daughter, 34-year-old Alexis, texted her back:

The reply from her son Justin, 26, was more succinct:

Returning to the theme of operating on a whole new level, CCL Strategic Coordinator Joe Robertson surprised everyone with an electrifying moment at the start of Monday’s session when he introduced the crowd, via Internet connection (above), to volunteers throughout the world who are starting CCL cha As they did the year before, the Wisconsin delegation blew people away with the number of folks who came to the conference. During his opening remarks, Marshall invited them to come to the front of the room. As they kept coming and coming — 44 in all —  Marshall joked, “I think you misunderstood me. Just the Wisconsin folks.” They then joined Marshall with leading the crowd in the singing of “This Land is Your Land.”

Before heading to the Hill, CCL volunteers were well prepared with the plenaries and workshops offered Monday, starting with Scott Nystrom’s (left) presentation of the study from Regional Economic Models, Inc. (REMI). The study, released just weeks earlier, examined the impact of a steadily-rising tax on carbon-based fuels of $10 per ton of carbon dioxide, increasing $10 per ton each year. It found that, after 20 years, the tax would reduce greenhouse gas emissions by 52 percent while adding 2.8 million jobs to the economy. Scott’s presentation would prove extremely valuable the next day when volunteers lobbied House and Senate offices.

After the REMI presentation, volunteers heard from keynote speaker Bob Inglis, the former congressman from South Carolina who lost an election in 2010, but found his calling in establishing a think tank – Energy and Enterprise Initiative – with the purpose of building support among conservatives for a market-based solution to climate change.

Inglis prepared volunteers for meetings with Republican offices by talking about the values and language that speaks to conservatives. Assisting him was a panel of CCL members from the Republican, Libertarian and Conservative Caucus. Each of them offered one-minute “elevator speeches,” and Bob gave feedback on the things that worked and didn’t work in each speech. After the morning plenaries, everyone broke for lunch. CCL Toronto leader Cheryl McNamara probably has not washed her hands since she shook President Obama’s hand at a nearby Chipotle restaurant. The President, Vice President and First Lady were attending a White House Summit on Working Families at the Omni Shoreham Hotel. During lunch time, Obama “dropped in” to dine with some of the folks from the summit.

In the afternoon, participants developed their skills and knowledge with a series of staff- and volunteer-led workshops, everything from fundraising to social media to faith and climate change. For a complete rundown on all the workshops, check out the conference program. In the weeks ahead, most of these workshops will be offered on CCL University, our weekly series of courses. To relax and loosen up a bit from a long day, many participants sang and danced during an evening of karaoke. One of the more touching moments came with the performance of CCL Long Island leader Ashley Hunt-Martorano (Shown above with Marshall Saunders). Ashley is terrified of singing in public, but during a fundraising workshop earlier in the day, she promised she would sing if folks in the workshop raised $250. They raised $275, and a near-hysterical Ashley came to the floor with a male chorus backing her up to sing Bon Jovi’s “Livin’ on a Prayer.” During her song, the hat was passed, and the final total raised was $525.

TUESDAY: On to the Hill!

From the Omni Shoreham Hotel and other points around Washington, CCL volunteers headed to the Metro at 7:30 in the morning for the trip to Capitol Hill and a full day of meetings with House and Senate offices. The first of those meetings were scheduled for 9 a.m., but we gathered for a photo at 8:15 on the same spot where last year’s photo was taken. We had to pull the camera back a bit more this year. Paraphrasing a line from “Jaws,” someone remarked, “We’re going to need a bigger Congress.” Following the photo, volunteers headed off to meet with 400 House and Senate offices throughout the day. There’s a famous quote that says, “When one is committed, providence moves, too.” This was clearly the case with our day of lobbying, which came on the same day that a bi-partisan coalition released the Risky Business report about the economic toll that global warming is having on the U.S. The report followed an essay in the Sunday New York Times from former Republican Treasury Secretary Hank Paulson calling for a carbon tax. Less than 24 hours before our day of lobbying, the Supreme Court ruled that the EPA could regulate greenhouse gas emissions.

Also, on the day before lobbying, CCL published an op-ed from Mark Reynolds on the The Hill’s Congress blog titled Curtail Regulations by Pricing Carbon. One more thing: In support of our call-in to Congress on Monday, musician Dave Matthews posted the action on his Tumblr page.

All of these factors, combined with the good news from the REMI report, made for some very productive meetings, particularly with Republican offices. From CCL’s press release:

“The REMI study generated a lot of buzz on Capitol Hill,” said Danny Richter, CCL’s legislative director. “We heard back from a lot of our volunteers who met with Republican offices that there was a great deal of interest in the REMI study. We turned some heads.”

The CCL meetings on the Hill began the same day that a bi-partisan coalition released the Risky Business report on the high cost that global warming will have on the U.S. economy if left unchecked.

“When people like former Treasury secretaries Hank Paulson and George Shultz, both Republicans, start talking about the extreme risk of taking no action on global warming, it increases the pressure on Congress to come up with solutions,” said Mark Reynolds, CCL executive director. “Members of Congress and their staff were listening to our proposal in a way they hadn’t before, and the Risky Business report certainly helped to pique their interest.”

“We’ve reached a juncture where Republicans cannot reject solutions to global warming without offering solutions of their own,” said Reynolds. “We’re offering a market-based alternative to regulation that puts money in people’s pockets and adds jobs to the economy. It comes as no surprise, then, that Republicans are interested.” Many of the meetings were face-to-face with members of Congress, although it sometimes required flexibility to make it happen. Above, members of CCL’s Texas delegation met with Rep. Lloyd Doggett (Second from right) near the steps outside the Capitol during a roll-call vote.

After a big day on the Hill, CCL volunteers packed a joyous reception (vegan food, as with the other CCL-sponsored meals) back at the hotel that featured a rousing speech from climate hero Sen. Sheldon Whitehouse (he really should run for president with a name like that).

“We are going to win this sooner than anybody thinks,” said Whitehouse. “There are some very good and brave Republicans who want to get this done as soon as they see daylight.”

Judging by the feedback we received from Tuesday’s meetings, our members encountered some of those Republicans earlier in the day.

Finishing off the week, thanks to the hard work of Rod Clifton, Greg Haugan and CCL’s Climate Security Team, we hosted a National Security and Climate Change roundtable at the American Legion. The meeting worked like an information exchange, featuring representatives of the American Legion, Veterans of Foreign Wars, Earth Policy Institute, Center for Naval Analyses and Citizens’ Climate Lobby. The takeaway: food and water supplies are at risk; the economy is part of our national security; climate change is a threat multiplier and a catalyst for destabilization. Panelists were Brigadier General Gerald Galloway (ret.), CNA; Janet Larsen, Earth Policy Institute, Director of Research; Danny Richter, PhD; the discussion was moderated by Joe Robertson, with the irrepressible Elli Sparks and Rod Clifton helping to pull the event together.

All in all, it was an amazing week in DC. The conversation has definitely shifted. As the saying goes, “You ain’t seen nothin’ yet.”