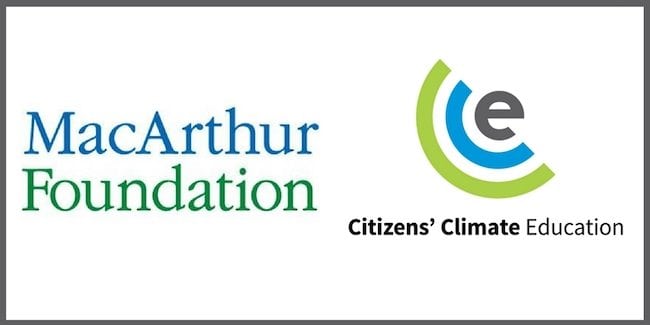 Citizens’ Climate Education (CCE) is pleased to announce that it has received a two-year, $1 million grant from the John D. and Catherine T. MacArthur Foundation to educate and empower citizens working on national solutions to climate change.

The grant follows a previous two-year, $500,000 grant from the MacArthur Foundation. At that time, foundation President Julia Stasch described its climate work as the kind of “big bet” that would “strive toward transformative change in areas of profound concern. This is not a search for quick fixes or easy wins, but an all-in, timely commitment—of talent, resources, time, and reputation—to real change that matters for many, many people.”

Since then, volunteers with CCE and its sister organization Citizens’ Climate Lobby (CCL) have played a leading role in the formation and growth of the bipartisan Climate Solutions Caucus in the U.S. Congress. Membership in the Caucus tripled in 2017 and now stands at 66, with equal numbers of Republicans and Democrats.

“This latest gift from the MacArthur Foundation is recognition that we’re on the right track, helping to heal the cultural divide in our country that prevents us from solving big problems like climate change,” said CCE Executive Director Mark Reynolds. “Our volunteers are laying the groundwork for breakthroughs on national climate action, and this support is an incredible boost for their work.”

Since 2007, Citizens’ Climate Education has trained ordinary citizens to educate political, business, and community leaders, along with members of the general public, about climate change and climate change solutions. To date it has enrolled more than 92,000 supporters to build bipartisan consensus for national climate action. In 2017, volunteers with CCE held 1,644 meetings with congressional offices and generated 4,308 publications including letters to the editor, op-eds, and articles in print and online publications.

“This generous gift from the MacArthur Foundation will provide resources and support for our amazing volunteers to be effective advocates for a livable world,” Reynolds said. “If you are trying to change the world and reality smacks you down, then it’s time to change that reality—that’s what our volunteers are doing.”