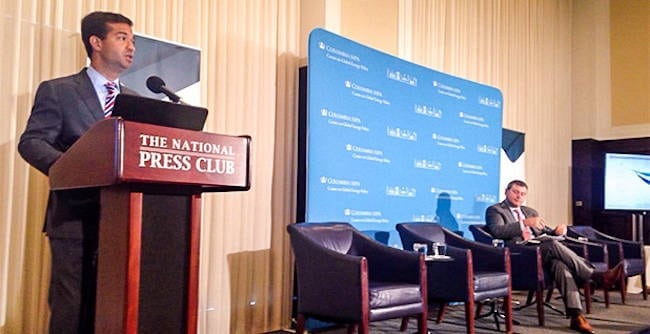 Yesterday, Florida Republican Rep. Carlos Curbelo introduced the Market Choice Act. CCL’s Executive Director Mark Reynolds said in a statement, “Representative Carlos Curbelo’s Market Choice Act would put a price on carbon, which is one of the most effective climate solutions available to us. At Citizens’ Climate Lobby we share the desire to see American jobs grow and carbon emissions drop. However, bipartisan support is ultimately necessary for legislation that stands the test of time. This is a first step toward that conversation.”

While this is not the fee and dividend style bill CCL ultimately hopes to see in Congress, this is an important moment. For nine years, our volunteers have said that Republicans can and will support a price on carbon, and today they did. Through our methods of respectful, persistent engagement with our legislators, Citizens’ Climate Lobby members across the country have helped make today possible.

Let’s take a closer look at the bill. The Market Choice Act would put a price on carbon and use most of the revenue to invest in infrastructure projects. The carbon price would begin at $24 per ton of emissions, and it would increase 2 percent above inflation annually. 75% of the revenue would go into a trust fund. Of that, 70 percent of the revenue would go to infrastructure, 10% would go as block grants to states to help households under 150% of the poverty line deal with increased costs, and the remainder would go to a variety of 15 additional programs aimed at infrastructure, energy assistance, adaptation, and energy research and development.

The bill would also get rid of the gas tax and pause certain regulations. It is worth noting that this is a primarily an infrastructure bill with positive emissions reduction benefits. It will not bring down emissions to the levels needed to address climate change. We’ll post a more complete summary of the bill details on CCL Community this week.

Still, a price on carbon would send a signal to fossil fuel companies and other industries that it’s time to start investing in cleaner, cheaper energy options. As they do so, America’s emissions will begin to drop. Economists agree that a straightforward price on carbon is one of the simplest, most effective approaches.

Rep. Curbelo is joined on this bill by fellow Republican Rep. Brian Fitzpatrick of Pennsylvania. It’s very meaningful to see Republicans sponsoring carbon pricing legislation. While this bill is primarily focused on infrastructure investment, using a carbon pricing mechanism to generate that investment shows that the solution is gaining traction.

This is an important moment for the carbon pricing conversation in Congress. CCL continues to be committed to introducing bipartisan legislation that follows the principles of our CF&D proposal, and we’re grateful to all of our volunteers who will keep advancing the carbon pricing conversation in their communities and with their members of Congress.