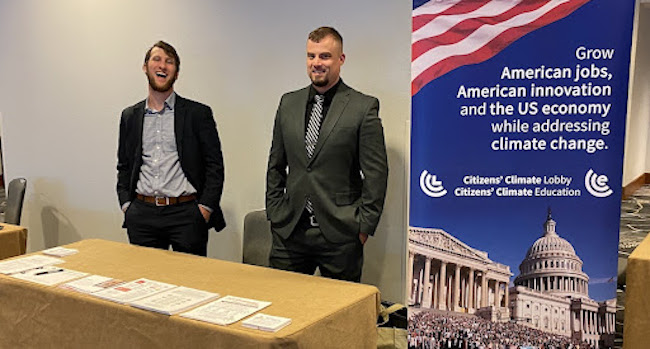 CCL’s Topher Anderson (left) and Drew Eyerly talked to conservatives at the Young Republican National Convention in Indianapolis this summer.

As a Republican concerned about climate change, Drew Eyerly often felt like a man without a community.

“In my own conservative circles, they looked at me like I was crazy, wondering why I would be worried about climate change. And then talking in liberal circles, it was, ‘Well, you’re not extreme enough, so therefore you’re against us.’”

While working on his degree in environmental management, his frustration spilled over during a class discussion about climate policy. His mostly liberal classmates kept talking about taxing and regulation.

Drew says he gave the class an earful “about how you can’t cause economic collapse. There has to be a better way to do all this stuff.”

The next day, the professor teaching the class called and asked if he was a Republican. He immediately launched into apology mode over his reaction.

“No, no! We need more voices like yours,” was her response.

The professor was Sabrina Fu, Citizens’ Climate Lobby’s Mid-Atlantic Regional Coordinator. She suggested he take a look at CCL and the climate policy of carbon fee and dividend.

After applying for a student scholarship, Drew attended his first CCL conference in June of 2017, where he found the community he was looking for.

“I walked into CCL with that little conservative label on my name tag. Within that first hour and a half, the amount of people that came up and said, ‘We appreciate you coming here and having a voice on this and standing up’…It was like, ‘I’m home.’”

Now he’s on a mission to bring other conservatives like himself to CCL.

The influence of young conservatives

Earlier this year, Drew came on board as CCL’s Conservative Outreach Director. Seeing that fertile ground lies with the younger generation of conservatives, Drew led a delegation that tabled at the Young Republican National Convention in Indianapolis last month. He estimates that he and his team spoke to between 150 and 200 people at the convention.

“Every conversation was positive. The young conservatives who came through were very open-minded. They are hungry for a conservative policy to address climate change, and carbon fee and dividend is it. That was the big takeaway.”

Poll after poll shows a decided gap between young and older conservatives when it comes to climate change, with the younger generation more concerned and open to meaningful remedies like carbon pricing. Drew credits the fact that climate science is now being taught in schools, something older generations did not experience growing up, and so young conservatives accept that the problem exists and have moved on to discussing solutions that align with their values.

Having young conservative voices in the room during meetings with Republican congressional offices can be a real game-changer, Drew says. “They’re very much interested in what the young Republicans have to say, because that’s their voter pool for the next 40 years.”

CCL has invested much time and effort in the bipartisan approach to climate advocacy, primarily because the organization sees it as the best way to ensure that climate policies hold up over the long run. “It’s the only way you’re not going to have that four-year pendulum swing,” said Drew.

To make inroads with Republican lawmakers, CCL has to increase its number of conservative volunteers. Boosting that number requires a change in strategy, Drew says. “We’ve always had this shotgun blast, one size fits all approach when it comes to conservatives. We’re developing more area and target-specific approaches. What works in Georgia is not going to work in California.”

As with much of CCL’s advocacy, listening plays a key role in bringing conservatives on board. Hearing someone’s story and what they care about is the best way to find the messages that resonate with them.

Drew’s story is a case in point.

Growing up in a small, rural town in central Pennsylvania, Drew loved the outdoors and spent a lot of time fishing and hunting. He was in ninth grade when terrorists attacked the U.S. on 9/11, and at 17 he joined the army.

“The day after I graduated high school, the very next morning, I was on the bus heading to basic training.”

During his 12 years in the military, he served as a medic with tours in Iraq, Afghanistan and Guantanamo, eventually reaching the rank of staff sergeant. While he was overseas, he began to notice the toll our dependency on fossil fuels was taking.

“I became very interested in the amount of casualties that were coming off of those fossil fuel routes. I pulled a 2009 report and saw that over 500 people a year were dying, and their deaths were directly related to fossil fuel convoys. That didn’t sit right with me.”

Initially, for Drew, the issue was about energy infrastructure, not climate change. He came home and started working on a degree in environmental management. Through his studies, he “started to come around on the science,” but still didn’t see climate change as an immediate threat.

It was the birth of his daughter that provided the motivation needed to take action.

“It took the birth of a 10-pound baby girl with cheeks so big she couldn’t open her eyes to get me to open mine.”

With Evelyn cradled in his arms, he saw a future where — if she followed in his footsteps serving in the military — she could be attacked while riding in a fuel convoy. Another concern was respiratory and cardiovascular afflictions from breathing the toxic fumes of diesel generators that power military outposts. However,  Drew didn’t see a solution he was comfortable with.

“I saw her 25 years down the road suffering because I didn’t do anything…I needed to be more involved, but I’m a Republican. I wanted something that still represented my conservative values.”

He found it, of course, when Sabrina Fu introduced him to CCL and carbon fee and dividend.

The lesson is that there are many paths conservatives might take to get involved in the issue of climate. We just have to listen and discern which path people are on. For those who’ve been in the military, the path may be full of concerns regarding the risks of fossil fuel dependency. For farmers, it may be the risk of increasingly unpredictable weather. For sportsmen, it may be the loss of wildlife habitat.

One thing we do know: Drew and CCL’s conservative outreach team will be listening.