Mary Selkirk is a CCL Governing Board member, serving as Chair of the Nominating Committee, and a Legacy Club Donor. Mary has worked on health rights in Central America for 15 years, helping to form an organization to raise money for medical supplies for parts of rural El Salvador during a civil war in the 1980s. She later became an elected official, doing water policy work in Sacramento with federal and state agencies, and has worked in public policy mediation.

Mary’s work has always been focused on the greater good, but there was a powerful shift when her 3-year-old daughter asked why a family friend left Tibet. Mary tried to explain that another country believed they owned the land. With a look of great puzzlement, her daughter replied, “I don’t understand how people think they can own the land. Only Mother Nature owns the land.”

Her daughter’s words of innate wisdom ignited Mary’s journey of deeper involvement into environmental issues. In 2013 she found CCL, when both she  and her husband Lee knew they wanted to do something on climate, and they retired around the same time. Like so many of us, passion and purpose collide within Mary’s CCL story. 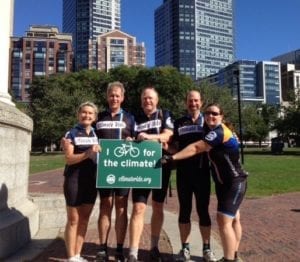 “Lee and I are recreational cyclists. We did the California Climate Ride, in which you spend five days riding 300 miles with a large group. We were en route for the ride in Northern California, and a man hops on the bus when we stop for lunch. He starts passing out little 3×5 pieces of paper about Citizens’ Climate Lobby.”

The man was fellow board member Ross Astoria! He’d come from Wisconsin to do the climate ride. A month after we attended the Wednesday Info Session, we joined the newly forming Alameda CCL chapter being co-led by Tony Sirna. We were group leaders for a year with between 8 to 20 members. Now, there are over 50 people at the meetings,” she recalls.

As our interview continued, I quickly learned that Mary Selkirk doesn’t shy away from adventure or her calling to help protect our planet, now and in the future, as a Legacy Club Donor.

Mary Selkirk: I’ve always loved anything to do with rivers and oceans and water. I have been running rivers for roughly 45 years. During my youth, I had the opportunity to go canoeing and sailing. I’ve been scuba diving, whitewater kayaking and rafting. I have a deep love of this planet, mainly through water. This love is what catapulted me into becoming an elected official in a major urban water district in California. Much of what we do as a family has been around water. Indoors, I’ve been studying classical piano and jazz piano for the last three years with a phenomenal instructor!

PT: Wow! So, how does CCL’s work connect with your family’s values?

MS: When I was a kid, my father would always say that what makes a democracy is not majority rule, but the rights of the minority party. That’s what makes democracy work. At eight years old, I didn’t understand what that meant. But it means that the essence of democracy in action is respecting, appreciating and connecting with the people whose views are in the minority in the country. That is the foundation of democracy.

What connects our family dynamics to CCL is the commitment to stay in the room with someone whose politics you strongly disagree with. As long as the person is genuine and authentic, you can find a way to connect on shared values. CCL is also an organization that supports new ideas. Think it up and you can just go do it!

PT: What inspired you to become a legacy donor?

Frankly, my husband and I have grown increasingly worried about what’s happening on the planet, so legacy giving was an easy decision. It was simple to make CCL a beneficiary, and most of the process was paperwork.

I think what’s happened in the last three months in our country, and seeing the staggering impacts of racial inequities and economic inequities, we’ve changed our own paradigm. We understand we won’t live forever and have to give until it hurts.

PT: Why was CCL your choice for legacy giving?

MS: We’ve been involved long enough to see the organization grow dramatically. When we went to our first conference in 2014, there were about 600 people at the conference and 6,000 volunteers nationwide. We’ve seen CCL explode in influence, and the core values are real to people who are involved. It gives us all a sense of connection, even with people we might otherwise find difficult.

CCL’s work will go on. If a carbon pricing bill passes, there’s going to be plenty more to do. I am confident CCL will keep growing long after we’re gone. It will remain as an organization that invites, encourages and supports regular people advocating to stabilize the planet. That’s what I’d like to support.

PT: How does being a legacy giver make you hopeful, especially during these difficult times?

MS: I think in the abstract. I’m confident that CCL will prevail, but every other day, I worry about human civilization. We’re in really harrowing times environmentally, but I think of hope as an orientation to the way I live my daily life. I have faith that you just do something because it’s the right thing to do – even when you can’t see where it’s going.

I just feel unbelievably grateful to be able to do this work. I don’t have to worry about a roof over my head or getting enough to eat. I have health care and I’m healthy. My daughter and grandchild are safe. I recognize that not everyone can contribute financially, so it’s a huge gift to have that capacity.

I feel optimistic that we will actualize the passing of major climate legislation, and CCL has an important role to play in the long and short term. There’s so much happening all over the country, but you look up and there’s a professional baseball player from the Milwaukee Brewers doing a pitch for CCL!

Editor’s note – Mary is talking about this great video:

Brent Suter, who pitches for the Milwaukee @Brewers, wants Congress to address #climate change! He calls this issue "mission critical for our society."

He supports a #PriceOnPollution with a dividend going back to Americans.

As we close in solidarity and with smiles, Mary shares that “the commitment to democracy, bipartisanship and citizen empowerment make CCL most attractive to me. I love the bipartisan policy, which was just a legislative proposal when I joined. We’ve all witnessed hyperpartisanship, and the insecure environment it creates in Washington, D.C. Fundamentally, there has to be unified action across the parties for any real stabilization of the climate. At CCL, there is real unity among senior leadership, board members, and volunteers. It’s all a sign of a great organization, and I want my legacy gift to support this work for future generations.”

Many thanks to Mary Selkirk!

August is national Make a Will Month, so we’re taking this time to share a sampling of the stories of our Legacy Club Donors. These are volunteers and staff who’ve decided to include a bequest designation to CCL/CCE in their estate plan. If you don’t yet have a will, you can use our trusted partner, FreeWill to make a will today! It takes less than 20 minutes, is legally valid, and there’s no obligation to make any specific bequest designation.

Princella Talley is a Development Associate and Diversity Outreach Coordinator for CCL.